🥘 🥧 Chicken Teriyaki Pattie 300 JMD not a Pie but similar good

When we planned our family holiday, I looked for possible football options, too. Planning started in December, however back then the travel situation in Jamaica was different than as of now. So I was happy when Jamaica announced to lift almost all restrictions from beginning of March. Before, there were travel restrictions within the country in place and football was played with no fans. Flights booked to Montego Bay, we stayed in a hotel nearby and took a rental car for an individual tour to the Mystic Mountain area (separate post will follow).

Even though Montego Bay (2nd largest city) has a football club in the Jamaican Premier League, all matches are currently played in one stadium per match day, mostly in and around Kingston. So I decided to wait for the bigger game the last match day of the World Cup qualifiers between Jamaica and Honduras. Did not found any lower division football.

I decided against going by rental car and went for the comfortable and cheaper option with the Knutsford Express bus going from Montego Bay airport to New Kingston. The journey takes about 3,5 hours and is very reliable. Jamaica had a railway between both cities, but it stopped operating in 1992 (what a shame).

New Kingston is a better district of the capital, where I stayed in a hotel and also where the national stadium is located at.

Instead of visiting Bob Marley’s former house (now museum), I decided to go to Port Royal (separate post will follow soon). I used buses both run by official government as well as (I would say) privately owned small buses which are running not on schedule but will stop everywhere and look for passengers (rates are both similar around 120 JMD per ride, 80 cents).

Kingston Downtown is very busy, chaotic and unstable to say the least, lot of weird people hanging around even during the day – poverty is a huge issue. But most are very friendly and welcoming.

COVID is still impacting Jamaica with mandatory mask rule all over, mostly adopted by people, but that’s it.

In the evening there was the planned football match at the big bowl of Independence Park. Tickets were available only for the Main stand at 3000 JMD, which prevented clearly that more people could attend. I think that the Government does not want full stadium yet, they pulled off vaccination rule to entry, but the ticket price is too high for most citizens. Jamaica is crazy at football, but the attendance does not reflect that, also not in their local Premier League.

It’s the last match day of the qualifiers, but Jamaica (2nd from bottom) and Honduras (bottom of the table) meant that both teams played more for the pride of their countries. However, all Jamaican stars returned on the pitch including Leon Bailey, who scored the equalising penalty, before former United midfielder Ravel Morrison (now playing for Derby County) scored the winner in first half’s extra time.

To my surprise, they had a popup stand with official Merchandise, where I could finally grab a Jamaica national kit. Btw: Leon Bailey played not good, besides that penalty… selfish on the ball, resulted in dropping possession – too much hype – his instagram site calls himself a brand, enough said – mad football world…
If all Jamaican born players would play for their nation like probably the best current England player Raheem Sterling (don’t like him, but he scored the important goals recently) plus others like Daniel Sturridge (back in the days), they would really compete for qualification against the likes of US, Canada and Mexico – but especially US / Canada has massively improved over the years, too.
Side note: Usain Bolt’s training track is also in Kingston and a statue was erected for him in front of the national stadium. 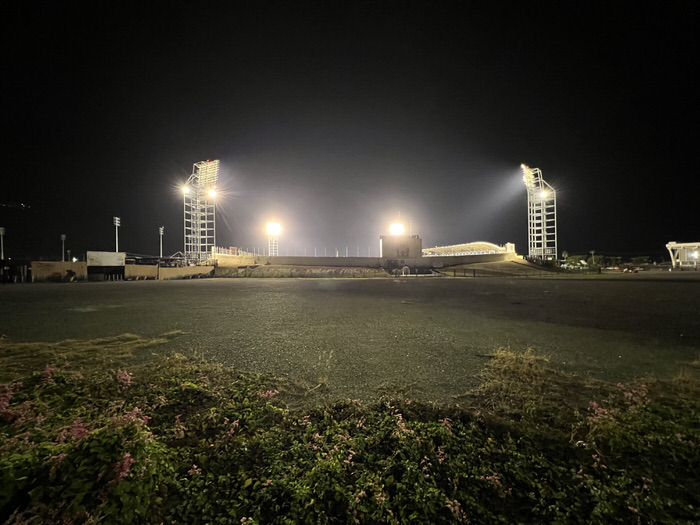